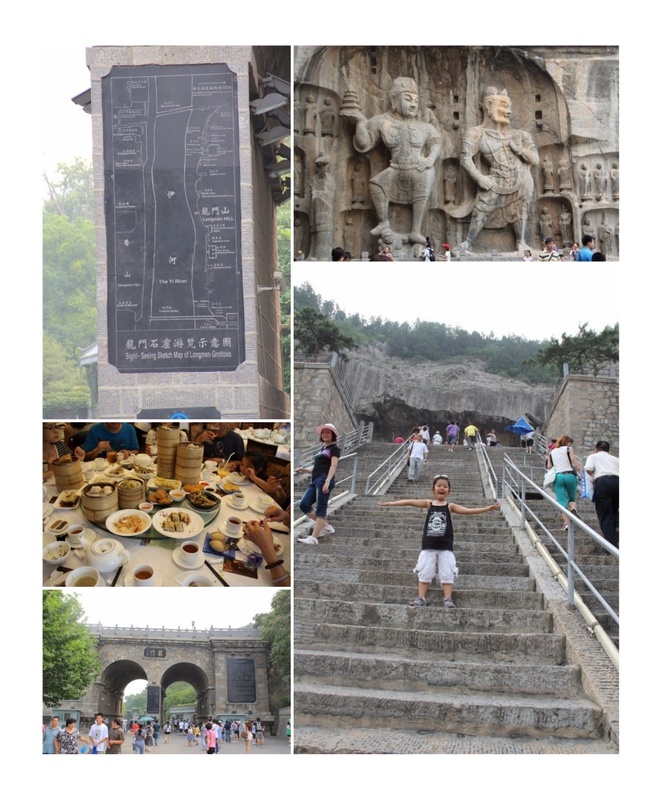 The Longmen Grottoes or Dragon's Gate Grottoes)  are one of the finest examples of Chinese Buddhist art. Housing tens of thousands of statues of Buddha and his disciples, they are located in Luòyáng city of Hénán province,in China. The images, many once painted, were carved into caves excavated from the limestone cliffs of the Xiangshan and Longmenshan mountains, running east and west. The Yi River flows northward between them and the area used to be called Yique ("The Gate of the Yi River").The alternative name of "Dragon's Gate Grottoes" derives from the resemblance of the two hills that check the flow of the Yi River to the typical "Chinese gate towers" that once marked the entrance to Luoyang from the south.

There are as many as 100,000 statues within the 1,400 caves, ranging from an 1 inch (25 mm) to 57 feet (17 m) in height. The area also contains nearly 2,500 stelae and inscriptions, whence the name “Forest of Ancient Stelae", as well as over sixty Buddhist pagodas. Situated in a scenic natural environment, the caves were dug from a 1 kilometre (0.62 mi) stretch of cliff running along both banks of the river. 30% of the Grottoes date from the Northern Wei Dynasty and 60% from the Tang, caves from other periods accounting for less than 10% of the total. Starting with the Northern Wei Dynasty in 493 AD, patrons and donors included emperors, Wu Zetian of the Tang dynasty, members of the royal family, other rich families, generals, and religious groups.

In 2000 the site was inscribed upon the UNESCO World Heritage List as “an outstanding manifestation of human artistic creativity,” for its perfection of an art form, and for its encapsulation of the cultural sophistication of Tang China.

I was glad that I can make it here.


This update was posted by Anastasia over 8 years ago.