A weekend break in Bahrain 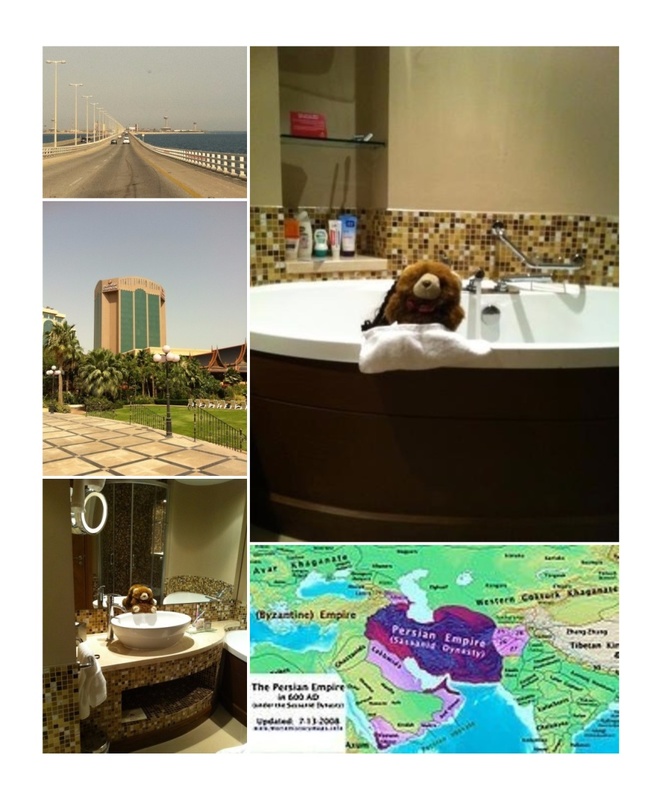 On Wednesday the 25th of June 2011 I travelled to Bahrain with Anastasia's family. We went there by taxi.

(In Saudi, the weekends are Thursdays and Fridays. This is because Friday to the locals is a day for their main pray in mosques, just almost similar to us going to church on Sundays). The 'weekend' on my title above was referred to Saudi's weekend.

Bahrain (Arabic: ‏البحرين‎ Al Baḥrayn), officially the Kingdom of Bahrain, is a small island state near the western shores of the Persian Gulf. It is ruled by the Al Khalifa royal family. (The same royal family as Saudi Arabia but it is a separate country).

Bahrain means "two seas" in Arabic. As the island is in the middle of a bay, the two seas referred to lie to the east and west respectively.

Saudi Arabia lies to the west and is connected to Bahrain by the King Fahd Causeway. It took us 1.5 hours from door to door (Anastasia's house in Ras Tanura - Saudi, to the hotel in Bahrain).

Like Saudi Arabia, Bahrain is an Islamic country, but pork products and alcoholic drinks are available there (but not in Saudi, by the way). In Bahrain, just like in the western world, women are free to work and mixed with men in social life. They are also allowed to drive and don't have to wear Abaya (it's a long, black gown like overall) if they don't want to.

In Bahrain, people also pray 5 times a day but all the shops and restaurants are still open as normal during these times.

We stayed in the Gulf Hotel. After we checked in, I decided to have a bath. It was ever so nice. I felt fully recharged afterwards and ready for our 'food hunting'. We went to a Brazilian grill restaurant (in Brazil it is called: Churrascaria). It was my first experience enjoying this kind of serving: the staff, with a long skewer full of meat, came to our table from time to time offering various grilled meat/seafood, ranging from chicken, pork, beef and lamb, to many kind of seafood, all marinated in different sauces. They were all so freshly cooked and yummy. I liked it a lot.

The next day, we went to a water park in the city centre called Wahoo. It is like a 'water heaven' with indoor and outdoor parks. Wow, it was a huge, FUN-tastic park with lots of water activities and facilities. A place that you could spend a whole day there easily. Loved it!

On the last day of the weekend (Friday, 27 June) we went to see the Grand Mosque of Bahrain in the morning. It is called: Al-Fatheh Grand Mosque. We couldn't go in, unfortunately, because it was Friday and the locals were about to pray in the mosque. We then headed to a place called:  Marina Bay, played in the sand with Anastasia and had some BBQ, it was so so hot, as always, so we had to stay under the shade pretty much most of the time to avoid the sun-burnt.

In mid afternoon, we went back to the Gulf Hotel, checking out and waiting for our taxi to take us back to Saudi. It was time to go home.

I really enjoyed this trip. It was very relaxing and we could breathe the air of freedom.

This update was posted by Anastasia about 9 years ago.